As a new graduate, you will eventually receive an emergency visit from a panicked client who is convinced that their geriatric dog has had a stroke.

You’ll rush into the exam room and be faced with an older dog with a head tilt, nystagmus, and trouble standing without falling to one side. The dog may even be rolling across the exam room floor.

What’s the most likely diagnosis?

Affected pets typically present within 24 hours of the onset of clinical signs. Owners often report an acute onset; their pet may have been clinically normal one minute and unable to walk just 30 minutes later. 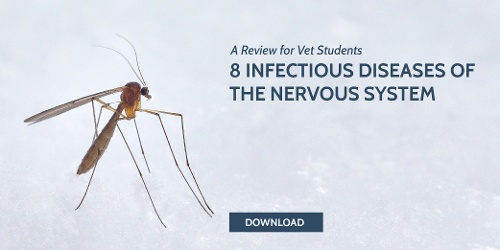 1. Determine whether the lesion is central or peripheral.

Central lesions causing vestibular disease tend to affect the brainstem and adjacent cranial nerves (especially CN V, CN VII, CN IX, and CN XII). Brainstem lesions are typically associated with altered mental status, conscious proprioceptive deficits, and paresis. Cranial nerve lesions can be detected using a thorough cranial nerve assessment, if you are able to perform one. Therefore, the absence of brainstem signs and other cranial nerve deficits suggests the presence of a peripheral lesion. The exceptions to this general rule are facial paralysis and Horner’s syndrome, both of which can occur with peripheral vestibular disease.

The nystagmus itself can also help you assess the likelihood of a central lesion. Central vestibular disease is more common in pets with:

2. Rule out other causes of peripheral vestibular disease.


The most significant differential diagnosis for idiopathic vestibular disease is otitis media/interna. A thorough otoscopic exam should be performed on all dogs with signs of peripheral vestibular disease. The presence of Horner’s syndrome (ptosis, miosis, and enophthalmos) should increase your suspicion of otitis media/interna, as should the presence of concurrent facial paralysis.

Unfortunately, it is challenging to fully rule out otitis interna as a cause of the pet’s signs. Imaging is required, such as bulla radiographs, CT scan, or MRI. Even if you elect not to perform immediate diagnostics, however, it is important to keep the possibility of otitis interna in the back of your mind.

Other differentials for peripheral vestibular disease include:

Consider these differentials before diagnosing a pet with idiopathic vestibular disease. While you may not necessarily perform diagnostics to rule out each of these conditions (in some cases, the patient will begin showing signs of improvement before you can get these tests performed and/or receive results from a reference lab), consider ruling out any underlying causes that seem likely in a given patient.

There is no specific treatment for idiopathic vestibular disease. Affected animals typically recover spontaneously over a period of days to weeks, although a residual head tilt may persist in some pets. Recurrence is possible but uncommon.

Supportive care may be required, especially in severely affected pets. Medications for motion sickness, such as meclizine and dimenhydrinate, may help alleviate some clinical signs. Antinausea medications, such as maropitant or chlorpromazine, may also be required in pets with nausea and/or vomiting. In some pets, reluctance or inability to drink may lead to a need for hospitalization and intravenous fluids.

Regardless of the diagnostics and treatments performed, it’s important to reassure owners that this is a relatively common and benign condition. It is not dangerous to the pet, despite being quite scary for owners! Work with owners to formulate a practical plan for nursing care, with the understanding that most pets are “back to normal” within a few days or weeks. 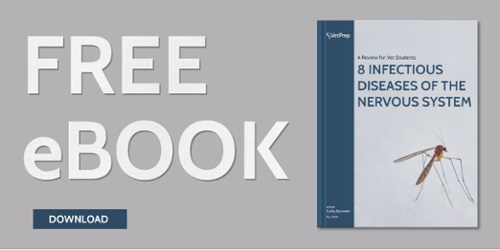